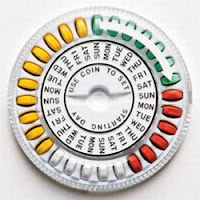 Lest anyone forget – sex is first and foremost about making babies. I don’t mean to sound like a one eyed family values crazy here, I’m just telling you what the whole thing has been designed for. As I’ve said before, what is sexy is anything that is good for making or raising babies.
As guys we’re pretty on top of what our role is in the making babies department. We make sperm and semen and basically attempt to get as much as possible of the baby batter into the vagina of a female. The female side of the equation is a little more complex. There’s two complete medical specialties devoted to the female plumbing and what happens inside there, while the male plumbing just gets lumped in with urology.
Most men see women as being somewhat random and confusing. They might be all shiny and happy about climbing into bed, or grumping mood swings, or calm and willing to please but not obviously turned on, or they can be menstruating and shut down the store completely. It’s not random though, it’s a predictable monthly cycle.
The first day of their menses marks the first day of the cycle. Menses can last 3-7 days. Most women aren’t feeling all that sexy during menstruation and honestly who can blame them. My advice is to use this time productively and get some of the items on the to do list completed. Make sure you have items like hand jobs and coming all over her breasts on the list though. Notice how much better you feel about yourself when you get things done. It’s energizing.

Ovulation can happen at any point from day 7 through 15 or 16. Typically it hits on day 13, 14, 15. Pretty much from the time her menses stops, her sex drive is going to be active, but around ovulation itself she is going to feel a surge in sexual interest. This is when she is most likely to; experience orgasms, want multiple orgasms, be the wettest, cheat on you and generally seek raw dog Alpha Male pounding. My strong suggestion is that you supply it. This is the grab a handful of hair time and just tell her what to do.
This is when she is most likely to suddenly decide she wants to “go to a club, just to dance”… this is why so much of the Alpha Male orientated game works on women for PUA. It doesn’t really work on women in general, but it does work on ovulating women in specific.
After ovulation sexual interest tends to drop. Around day 21 of her cycle the infamous mood swings and drama from PMS can start up. The uncomfortable and bloated feelings generally continue until menstruation starts. Pulling her hair and bossing her about will likely prove counter productive. Leg shaving behavior decreases this week. These are great times to pro-actively up your Beta Male skill game, these are good nights to offer to cook, do that extra errand, need a backrub? It’s a fine line to walk, but do cater to her because she isn’t feeling the greatest, but don’t cater to temper tantrums – those need to be addressed, or they will get worse and worse over the years. Men aren’t allowed to use “hormones” as a defense for bad behavior and neither should women. Sorry your honor, the testosterone made me do it.
Also PMS is another reason to add to Assanova’s on why you shouldn’t wait 3-4 days to call a girl back. If you really click in the club when she’s just coming off her ovulation sexual activation, waiting too long is moving further away from that sexually excited feeling and heading closer and closer to PMS. Maybe this is why she didn’t seem very excited to get your call. You’re just playing hard to get anything.
Generally all the sexual attempts for the smart husband during the month should be all purpose mutual satisfaction, but around ovulation it is very important to make her feel desired. This is when the just why don’t you rip my clothes off and take me gene kicks in. My wife is on birth control pills, so her cycle is very stable. I take some colored highlighters and mark on my day planner her menses, ovulation and PMS for months in advance. Just a gentle swipe of the pen to mark the days. Day 1-3 (Tue-Thur) menses (pink), Day 13-17 (Mon-Fri) Ovulation (yellow), Day 20-22 (Mon-Wed) PMS (blue). (That’s PMS emotional symptoms. Physical symptoms of bloating et al continue until menses) As it is with this system, I generally know my wife’s cycle better than she does. If anyone asks about the highlighter marks, I just say none of your business.
Now… for the single guys.
If you can discover when your target is having either her PMS spike or her menstrual flow, she has also by default told you when her ovulation is, just do the math. Ovulation basically comes exactly two weeks after her menses starts. If you can also determine if she is on birth control pills her menses will most likely start on a Tuesday as almost all birth control packs sync and start the pills on a Sunday and force the menses to a Tuesday start. So therefore ovulation will also start on a Tuesday (+/- 1 day, but Tuesday is a good bet) And if this a special girl you’re looking to breakdown, I’d set a date for the fclose attempt on a Tuesday that she is ovulating. This is the day to go for a serious Friendzone breakout as well.
Also a Tuesday date emotionally says “I’m interested and want to spend some of my regular time with you”. Which is… true.
*Edit*  Note that if she is on birth control control pills, she cannot actually ovulate. That’s what the pills are designed to stop. The birth control pills will tend to flatten out the peaks and valleys in sexual interest somewhat, or possibly even diminish sexual interest across the cycle as a whole. It’s still useful to know the part of the cycle where she has greater interest, but it’s not as dramatic as for a woman not on birth control pills. They certainly still experience PMS lol. Overall though, maybe not quite as useful as I had thought. Welcome to the Interwebs, all your mistakes are now public.